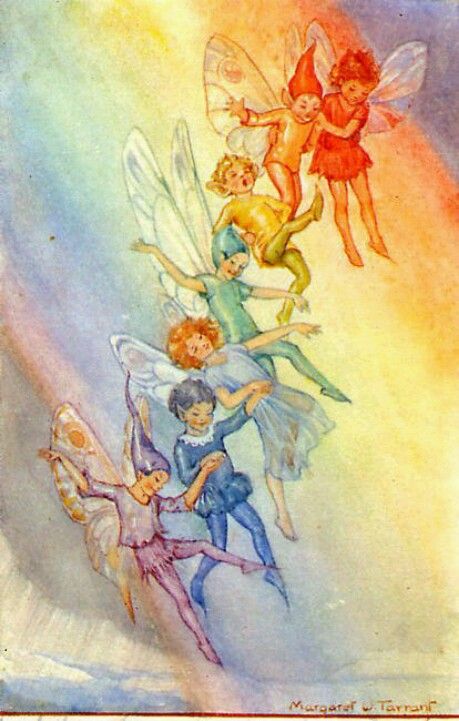 “Be thou the rainbow in the storms of life. The evening beam that smiles the clouds away, and tints tomorrow with prophetic ray.”

As I delve further into Ethel Turner, I am starting to wonder why I didn’t have tea with a one-book wonder instead. How could I possibly hope to fathom such a prolific writer when it could well take me more than a lifetime to read all her works, let along provide any meaningful analysis? However, lockdown does strange things to the mind and the soul. So, here I am back here having tea with Ethel Turner again.

For Seven Little Australians’ fans, these opening posts at Tea With Ethel Turner might seem a bit random, and you’re anxious for me to get to the point. However, as I said at the outset, I’m wanting to present the full diversity of Ethel’s writing and to explore both her writing and her back story in depth. so, for those of you like me who thought you knew Ethel Turner, you might need to reconsider.

Anyway, today while we’re sipping tea, I’m going to share what I call “Ethel’s Rainbow Poem”, If?, which appeared in the Mirror on the 13th October, 1917:

Oh, if that rainbow up there just for a moment would reach

Through the wet slopes of the air here where I stand on the beach.

Here, where the waves wash the strand, swing itself lovingly low,

Let me catch fast with one hand, climb its frail rigging, and go! 1.

I have to admit I love rainbows, and have been known to go rainbow chasing with my kids and the camera in the car. Rainbows are like pure magic painted across a stormy sky as the sun comes out and hits that magic sweet spot, diffracting the light. Who hasn’t wasn’t to grab hold of a rainbow in one way or another and go for a magical ride? I’ve never thought of climbing a rainbow before, and it’s also been quite a few years since I’ve gone looking for the leprechaun’s magic pot of gold. However, that hasn’t stopped me from trying to capture rainbows forever in 6 x 4. while climbing onto a rainbow might be pure fantasy, it’s one of the few ways Climbing a rainbow is the only way any of us cut-off Australians are going to make it overseas at the moment. Escaping into a world of fantasy also has obvious appeal, and even more so for anyone reading it in 1917 during the horrors of the Great War when there were absolutely no certainties about when it was all going to end.

As it turned out, the lines above were actually only a fragment of a much longer poem:

Right in the midst of WWI, Ethel had her beautiful poem: If? published

However, at this point, I’d like to share what I call her “Rainbow Poem”. It’s absolutely magnificent, and more than likely was named after Rudyard Kipling’s famous poem of the same name. So, without any further mad ramblings and distraction, here it is:

This was actually a fragment of a much larger poem:

Oh, If That Rainbow Up There

Here where the waves wash the strand,

Or where the isles of the dawn
Lie on an amethyst sea,

Does it drift, pale and forlorn,
Ghost of the glory I see?
Is there, ah, is there a land
Such as the Icelanders say,
Or past the West’s ruddy strand
Or on the edge of the day,

Some undiscovered clime
Seen through a cloud’s sudden rift,
Where all the rainbows of Time
Slowly and silently drift?
Some happy port of a sea
Never a world’s sail has made,
Where till the earth shadows flee
Never a rainbow may fade.

Oh, if that rainbow up there,
Just for a moment would reach,
Through the wet slope of the air
Here where I stand on the beach.
Here where the waves wash the strand
Swing itself lovingly low,
Let me catch fast with one hand,
Climb its frail rigging and go!

Lockdown, and most importantly as a vulnerable person, hasn’t been easy. During this time, I also found comfort knowing that Ethel had gone through the Spanish Flu and the Great War and come out the other side. Not only that, through her books she has given us a window into that world, and her children’s columns no doubt helped our young Australians grapple with the incomprehensible.